I dropped by the shack today to meet with the electrician and it was a total beehive of activity. Martin, Gerry and the plumber were already there. Mason and his work crew arrived while I was there, they were blocking up some party wall holes in the attic and preparing to remove the windows. It’s a rotten day for it, very cold and windy.

The plumber was scoping out the pipes with a camera. There is an old galvanized drain pipe in the kitchen. It’s badly corroded, so we decided to block it off and drain out through the bathroom. This means that we have to pull up some of the wood floor in the kitchen to get supply and drain lines routed over there.

So this brings up a pretty embarrassing fact. There is no basement or underfloor access in the place. Up until last week when we looked under those floorboards, I had no idea what was under there. That’s right, I bought a house and I had no idea what the foundation looked like. A few people, mostly coworkers, asked me about it when they dropped by for a look and when I said I didn’t know they looked at me like I was crazy. It’s like buying a car and not looking under the hood to see if it comes with an engine.

I put my faith in the 19th century British military engineers that designed the place. The floor is very solid and everything is nice and level so I knew it couldn’t be too hinky. There is a concrete footing visible on the outside, but what was going on inside, no idea.  I knew there had to be some concrete under there and that the place was 100 years old and hadn’t fallen in yet, so how bad could it be?

It reminds me of the response my father got from the owner of a gas station where he was replacing the underground tanks. They had excavated beside the foundation wall and the wall started collapsing into the pit. My dad freaks out and says, “Angus, your station is going to fall into the pit!” Angus looks at the building and then looks at the pit and says, “Well, it can’t ALL fall in.”  So that has become the go-to phrase in our house when someone is catastrophizing the situation. And that’s what allowed me to overlook that missing bit of information and buy the place.

Turns out there is a concrete slab under the floor. Whew. 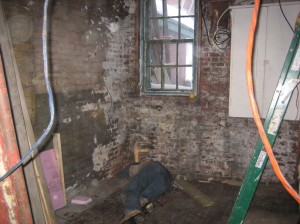 Gerry removed the decayed kitchen floor under the old sink

The plumber's camera scope. It's a SeeSnake!

Not a really clear shot, but this is what we saw down there.

Apparently this is the problem with galvanized pipe.

This entry was posted in Before. Bookmark the permalink.

1 Response to Down Under